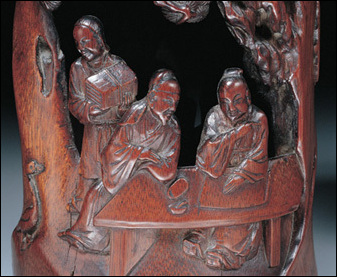 The exhibition of this exquisite Chinese bamboo brushpot is prompted by the recent record-breaking auction sales of two Chinese bamboo brush pots by the 17th Century bamboo carver Gu Jue (1662-1722). A Brushpot carved with minute details to depict travelers in a mountain landscape, and signed by the master carver, Gu Jue, who was active in the late 17the Century was sold by Christie’s in May, 2005 for an astounding price of HK$ 11,000,000 or approximately US$ 1,400,000. Another brush pot by the same carver from the Mary and George Bloch Collection was sold by Sotheby’s in October, 2005 for HK$ 5,200,000 or approximately US$ 650,000. The amazing price achieved for Chinese bamboo carving has placed this art form back to the favorite acquisition list of Chinese art patrons. i4uuu Collection Museum is proud to present in the time of renewed interests in Chinese bamboo carving art a beautiful bamboo brush pot by the master carver, Zhu Sansong.

Zhu Sansong is the youngest of the three Zhu masters of the late 16th Century in the Jiading, Jiangsu Province. His works and those of his father, Zhu Ying (1520-1587), are characterized by original compositions of figures in nature, elegant spatial layout, and a keen interest in the characters’ interaction through eye contacts, expression and posture. The Zhu family founded the Jiading school of bamboo carving and their followers such as Gu Jue and Wu Zhifan flourished until the eighteenth Century.

The i4uuu brush pot has openwork carving as the other known Zhu Sansong work, an incense holder, in the Metropolitan Museum of Art collection. The openwork relief depicts ” Wang Xizhi bartered his calligraphy for a beloved Goose”, the legendary story of the 4th Century master calligrapher, Wang Xizhi (303-379 AD) who would use his calligraphy in exchange for a goose. The round bamboo section is intricately carved with openwork depicting Wang Xizhi at the writing table while another literati sitting next to him enjoying his performance and excited about the exchange. An attendant is standing by the two literati holding books and tending the lovely goose. The playful goose keeps his eyes on the present and future masters. Two more attendants on the backside of the brush pot are tending to tea-making and flower arrangement for their master. All this is arranged in a rocky outdoor setting underneath a pine tree with a scaly trunk and twisting branches. The inscription preceding the signature reads Su Zhong Long Erh Gong, Her Zheng Bie Zhu Ren (Calligraphy is to pamper the caged goose who would never think of leaving his master). The signature following the inscription is the artist’s signature in archaic characters, Li Shu or Li style calligraphy, which reads ” San Song”. A two character rectangular seal follows the signature. This brush pot is a true testimony of the old Chinese text account of Jiading school bamboo carving as ” to use knife instead of brush to draw painting and write calligraphy”. The fact that the signature is in archaic characters and that there is a carved seal of the carver is consistent with signature style of other Jiading school carvers such as Zhu Ying, Gu Jue, and Wu Zhifan.

Extant works of Zhu family are extremely rare. Other known Zhu Sansong bamboo carving works are in the collections of the National Palace Museum in Taipei and the Metropolitan Museum of Art. As previously mentioned, the i4uuu brush pot shares the same carving style and exquisite quality with the incense holder in the Metropolitan Museum of Art. The well-known brush pot with Zhu Sansong signature in the National Palace Museum has shallow relief carving with neither openwork nor original compositional design. The composition is the direct copy of a woodblock print by the Ming painter, Chen Hongshou (1598-1652). The book was published in the 10th year of Chongzhen Period (1637) when Zhu Sansong was either dead or not active at the time. This leads to the conclusion that the National Palace Museum brush pot is a later work with apocryphal signature. (ref. James Watt, “Official art and Commercial art,” in Wen C. Fong & James C. Y. watt, “Possessing the Past, New York: The Metropolitan Museum of Art, and Taipei: National Palace Museum, 1996, pp. 465-467). According to a book by Jin Yuanjue of the 18th Century, Biography of Bamboo Carvers or Zhu Ren Lu, the characteristics of Zhu family bamboo carvers’ art are original composition of scenes rivaling the best paintings, skillful use of knife as if it is a painter’s brush and extensive use of deep openwork and high relief technique. Based on the criteria set by Jin Yuanjue, it would be safe to conclude that the two Chinese bamboo works signed by Zhu Sansong in the Metropolitan Museum of Art and i4uuu Collection Museum are both original works by the Ming Dynasty master and the one in the National Palace Museum is a later copy with apocryphal signature.


The incense holder in the Metropolitan Museum of Art:


The brush pot in the National Palace Museum:

i4uuu Collection Museum is a museum established by the internet conglomerate, i4uuu Group. The i4uuu Collection consists of more than 2000 important Asian art works collected in the span of 20 years by the founder of i4uuu Group. The Collection is known for its holdings of Asian sculpture, East Asian painting and calligraphy, oriental ceramics and Zen art. The Museum attained world fame in early 2005 when it announced the existence of the original 13th Century manuscript of the important Zen Buddhism book, Mumonkan or the Gateless Gate. The Museum website is http://www.asianartmuseum.org