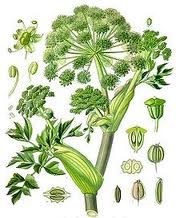 This herb is named after Archangel Raphael, who according to a tenth-century French legend, revealed the secrets of this herb to a monk for use during a plague epidemic.Angelica is one of nature’s most versatile herbs. It is recommended by herbalists for indigestion and stomache up-sets. It is also an excellent expectorant. The famous English herbalist Culpeper noted that it “helpeth the pleurisy, as also all other diseases of the lungs and breast.”

Angelica has a warming effect on the body. It promotes circulation of blood to the extremities and has traditionally been given to people suffering from cold hands and feet due to anemia.

Women use Angelica to alleviate painful menstrual cramps. Applied externally, it may provide relief from painand swelling caused by rheumatism. It is also useful for skin lice; it will relieve itching while getting rid of the troublesome pests.

Relieves buildup of phlegm due to asthma and bronchitis.

Good for people who get cold easily.

How To Use It

Do not use during pregnancy. Large doses can affect blood

pressure, heart action, and respiration. To avoid these

problems, do not exceed recommended dose.

(It might be wise to consult a professional herbalist before use.)