Image by elycefeliz
There will come soft rains and the smell of the ground,
And swallows circling with their shimmering sound;
And frogs in the pool singing at night,
And wild plum trees in tremulous white;
Robins will wear their feathery fire,
Whistling their whims on a low fence-wire;
And not one will know of the war, not one
Will care at last when it is done.
Not one would mind, neither bird nor tree,
If mankind perished utterly;
And Spring herself when she woke at dawn
Would scarcely know that we were gone.
~ Sara Teasdale, poem published 1920

"There Will Come Soft Rains" is a short story by science fiction author Ray Bradbury which was first published in the May 6, 1950 issue of Collier’s. The story begins by introducing the reader to a robotically controlled house that cooks, cleans, and takes care of virtually every need that a family could have. The reader enters the text on the morning of August 4, 2026 and follows the house through some of the daily tasks that it performs as it prepares its inhabitants for a day of work and school. At first it is not apparent that anything is wrong, but eventually it becomes clear that the inhabitants of the house are not present and that the house is empty. The explanation for the whereabouts of the residents is explained in that there are silhouettes of a woman, a man, and two children along a burnt side of the house. It is also explained that the area surrounding the house is destroyed and that it gives off a "radioactive glow." The only thing left standing is the house which continues to perform its duties to the family even though they are gone. At one point, further insight into the demise of the family is given when the house recites a poem by Sarah Teasdale called "There Will Come Soft Rains". The poem describes how nature is unaffected by the demise of humanity through war. At ten o’clock, the house is finally destroyed as well when the wind blows a tree onto the house, causing a fire to break out. The house warns the family to get out of the building and attempts to fight the fire, but is eventually overcome. The house burns to the ground except for one wall, which continues to give the time and date the following morning. Image by д§mд
When I can look Life in the eyes,
Grown calm and very coldly wise,
Life will have given me the Truth,
And taken in exchange – my youth.

ps: for details on this shot … go through tags 😉

Have a look at her expression in darkness =)

Moonlight will not hurt me Image by rhetoricjunkie
I was thinking about a poem by Sara Teasdale called "Moonlight" when I saw that though it was light the moon was out. I love the clouds almost obscuring the moon. I’ve been wanting to take a moon photo for a while, now. I’m glad this is the one I got. 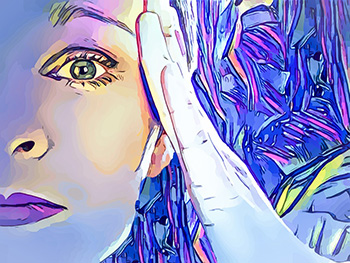